“Did Someone Say the ‘F’ Word?” Incentivizing Activity with Freebies 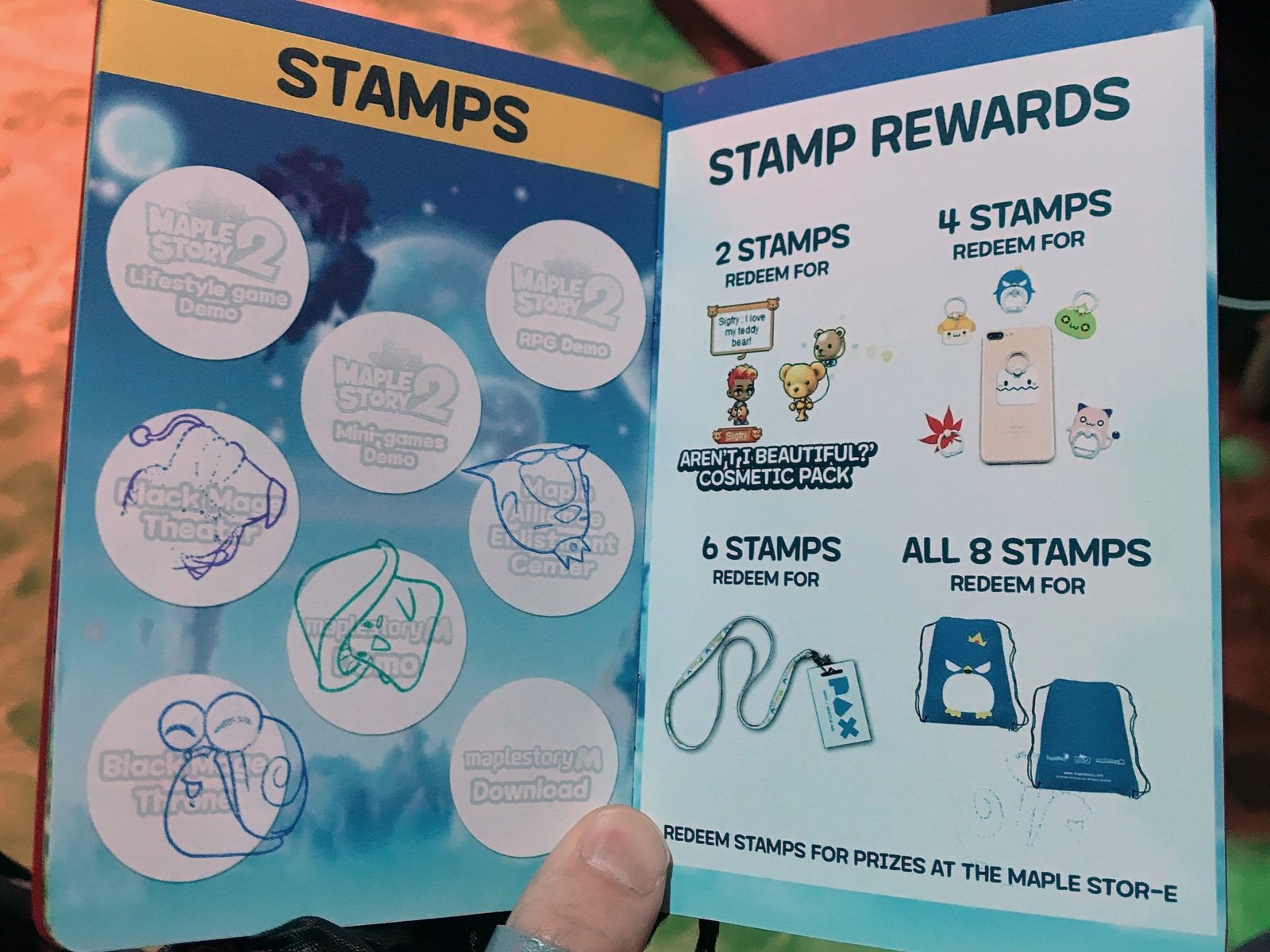 I recently had the chance to attend PAX West as a special guest. Specifically, I was putting on an informative tabletop game design panel with a few amazing individuals. It was a great chance to share more about what I’ve learned over the years.

With the panel being on the last day of a four-day convention, I had plenty of time to wander around and explore the many other geeky things going on. One thing that became pretty apparent at the convention was the usage of freebies (or swag) to get fans to do things.

The basic formula is pretty simple, get fans do something and give them something for free (even just a chance works). This was iterated upon in many different ways: 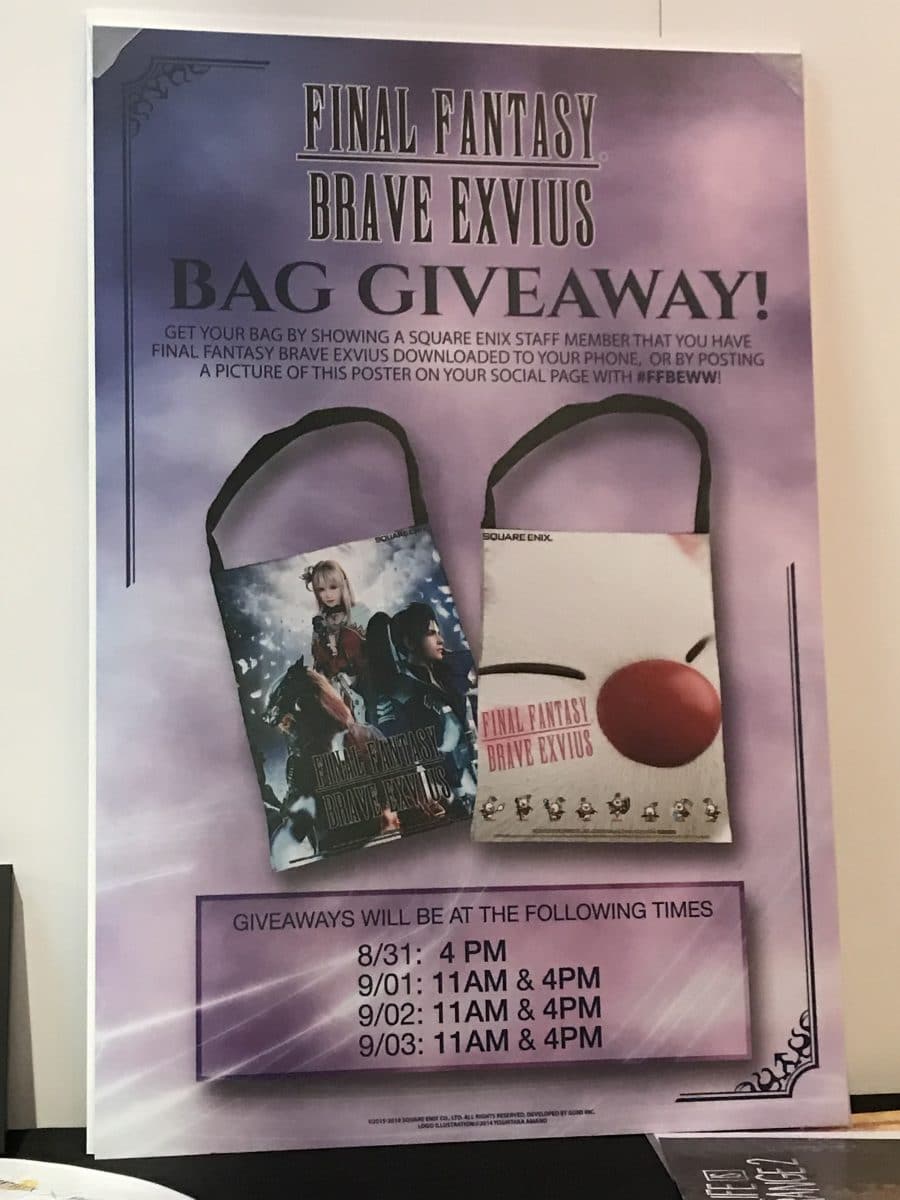 This was probably the simplest form of incentivization that I saw at PAX West.

Fans are instructed to simply generate some form of content that then must be posted to social media, in exchange for something free. There were many booths that employed this method, sometimes paired with a hashtag to generate social buzz.

One of the benefits of getting fans to post content and hashtag about it is that your message will reach people that otherwise might be inaccessible—friends of the poster. Social media content with hashtags also receive much more engagement overall.

Though this method of engagement was pretty straightforward, lack of connectivity in most parts of the convention center led to fans needed to step outside, often, in order to have social media posts go through. This leads to the potential for interested fans to simply ignore such an activity because it’s too cumbersome to do.

With so many companies competing for eyeballs on the floor, social media was a great way of getting people to pay attention to messages when and where they were needed. A few businesses went so far out of their way to even get people to keep an eye out on Twitter at specific times for the low-down on giveaways.

PAX West just got a whole lot tastier with our #MHGU food truck this weekend! Hunt for our current location with #FANDOMMonsterHunger to get free food ? pic.twitter.com/14d5kmAVOm

Here’s the card that I got, showing more about the promotion, including specific food offerings on the back. 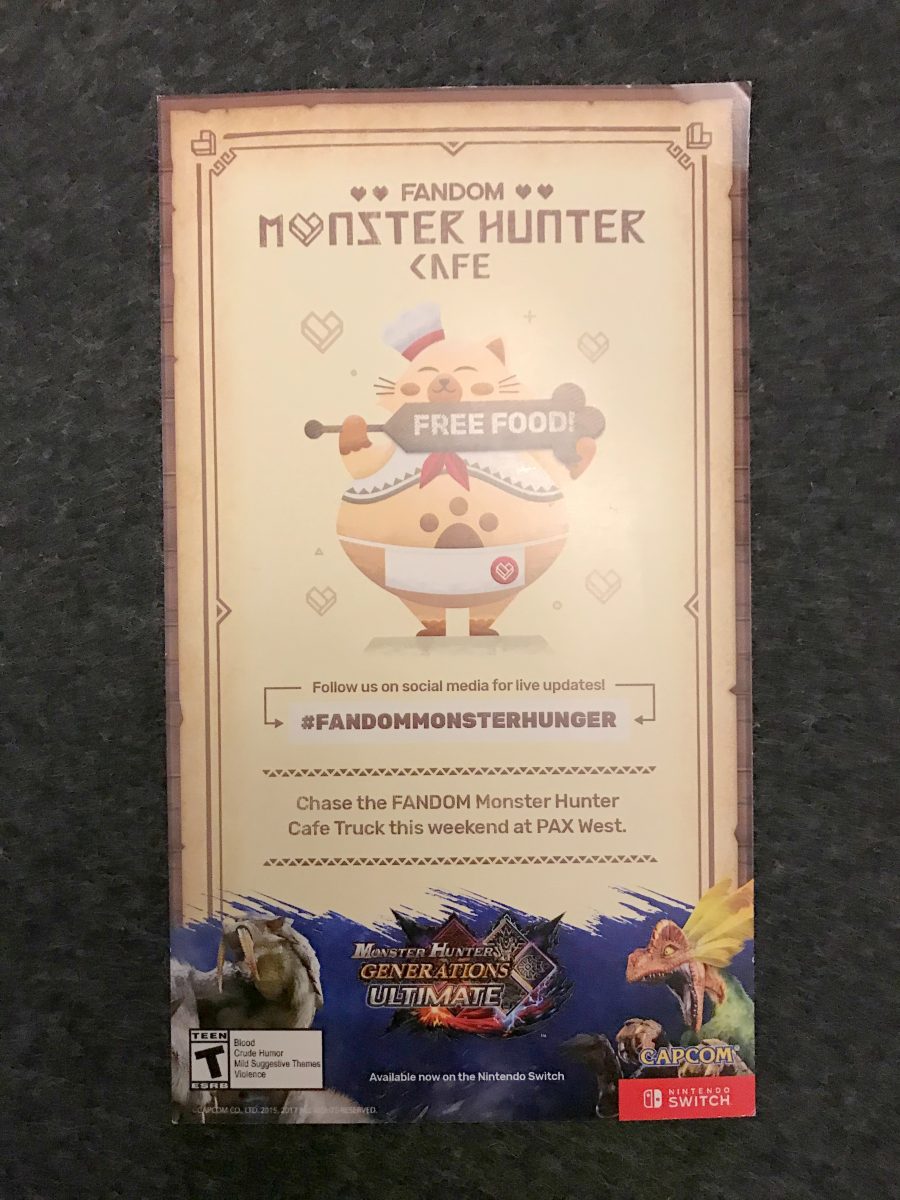 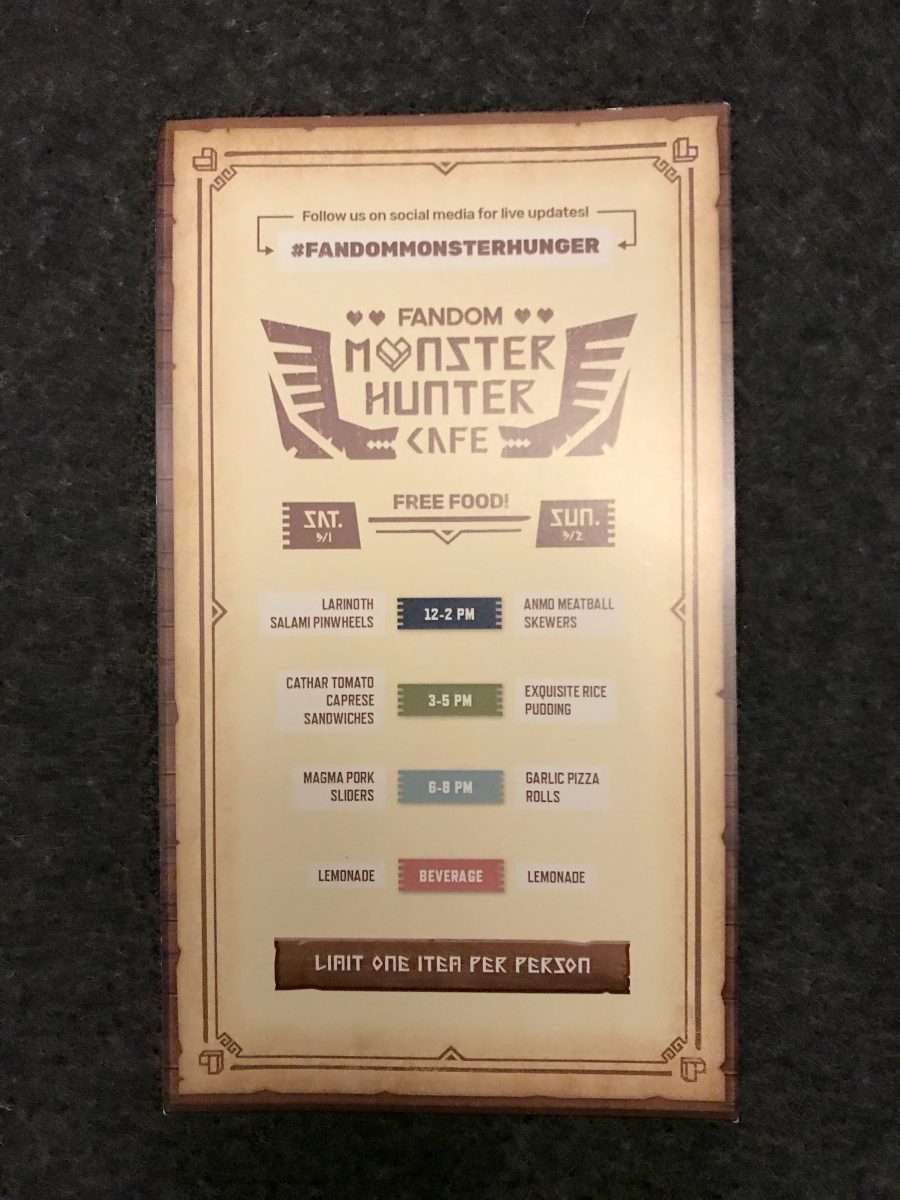 Incentivizing fans to follow social media allowed businesses to bypass a lot of the noise going on. It also added an allure of exclusivity making the promotion even more special for those in the know.

Everyone attending PAX has a badge that has an RFID chip embedded within it. RFID chips open up a host of cool technologies that can not only be used to promote security and reduce theft, but to increase convention-goer activity. One such way that badges were being used to promote fan activity was through badges being used to activate a slot machine.

PAX-goers would tap their badge on an RFID sensor which would then show a slot machine with spinning wheels on the screen above. Depending on what the output was, these people would get prizes in the form of points, shirts, free game codes, and much more.

Whereas the above methods mostly focused on one action per giveaway, there were many booths that got people to do multiple actions in exchange for free stuff. The most common way I saw that this was done through the usage of a single stamp (or token) for an action.

Stamps would be collected, in this manner, until reaching a certain prize threshold. Oftentimes, game companies would use this method of engagement to get prospective players to play multiple games (as was the case with Team17’s booth. 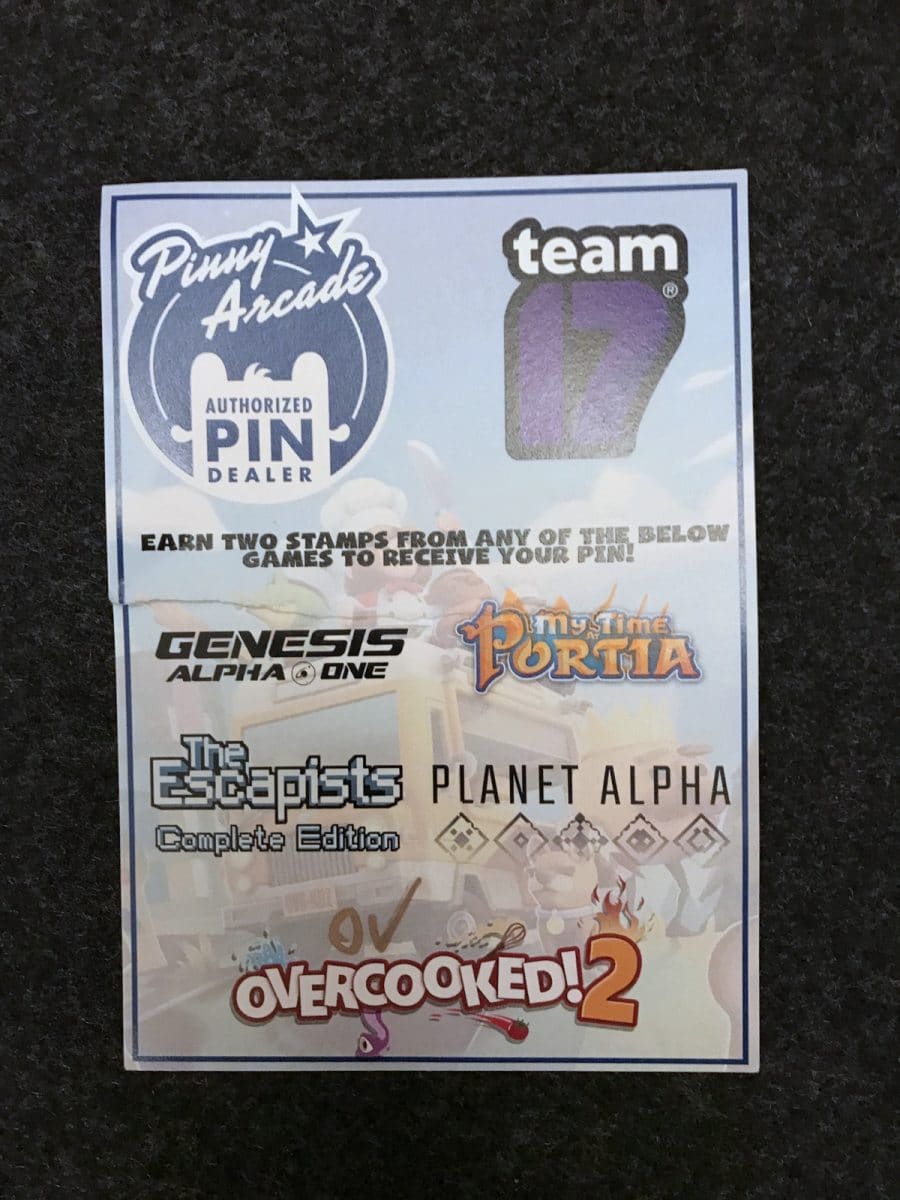 Though they didn’t really stamp this card, they did make a mark on it. The end goal of this promotion was a pin featuring a character from one of their games.

In other cases, businesses had multiple thresholds that could be reached for various freebies. The most interesting case I found of this came from the Maple Story booth. This booth had eight separate actions that, if completed, would result in fans receiving a bunch of goodies. 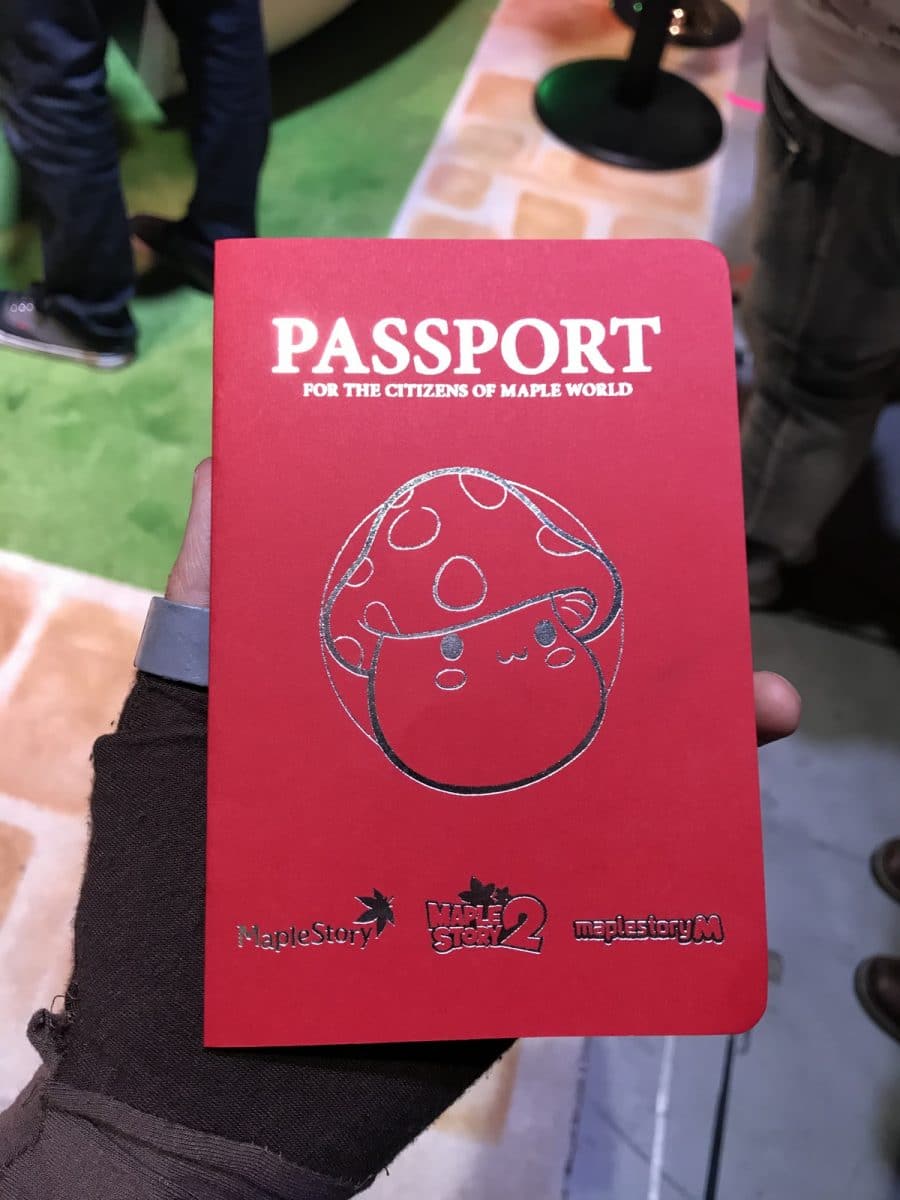 Here is the front of their passport. 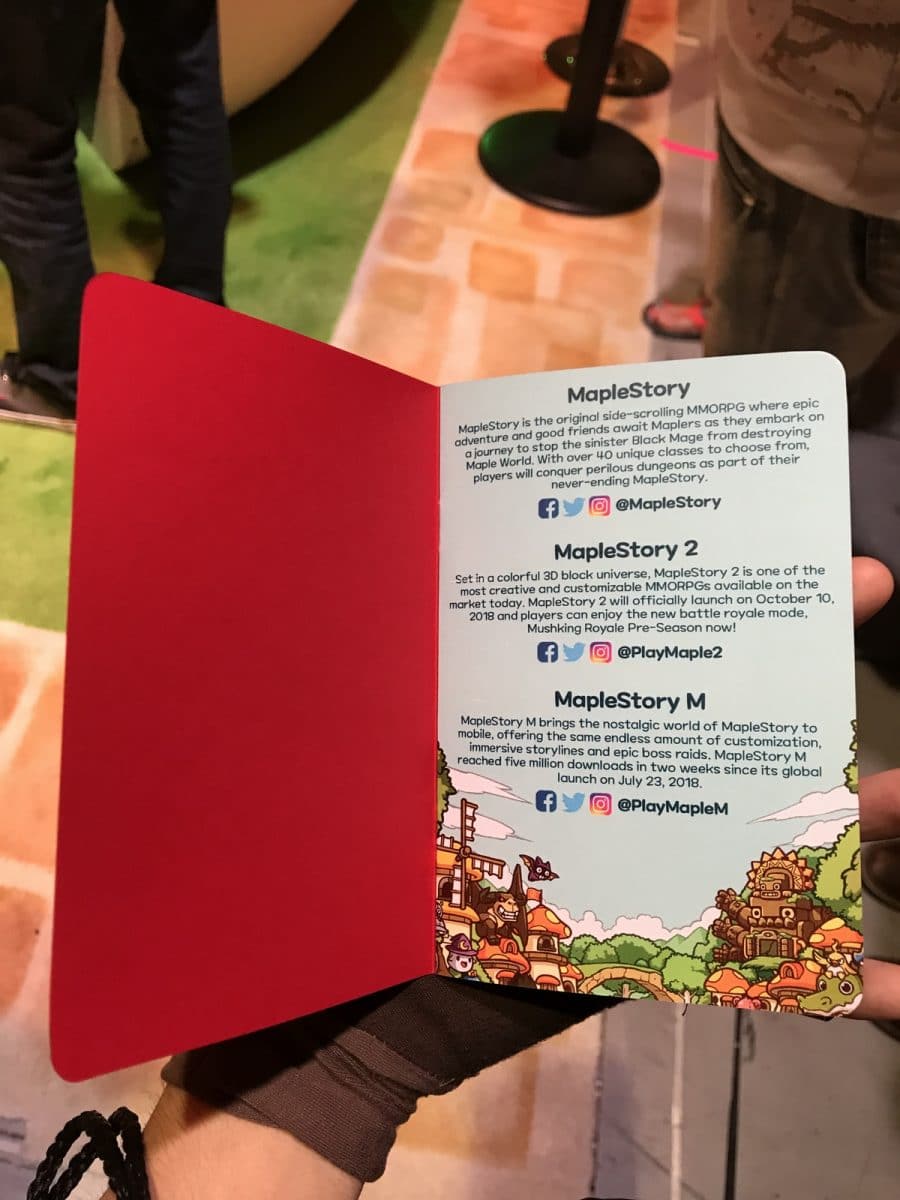 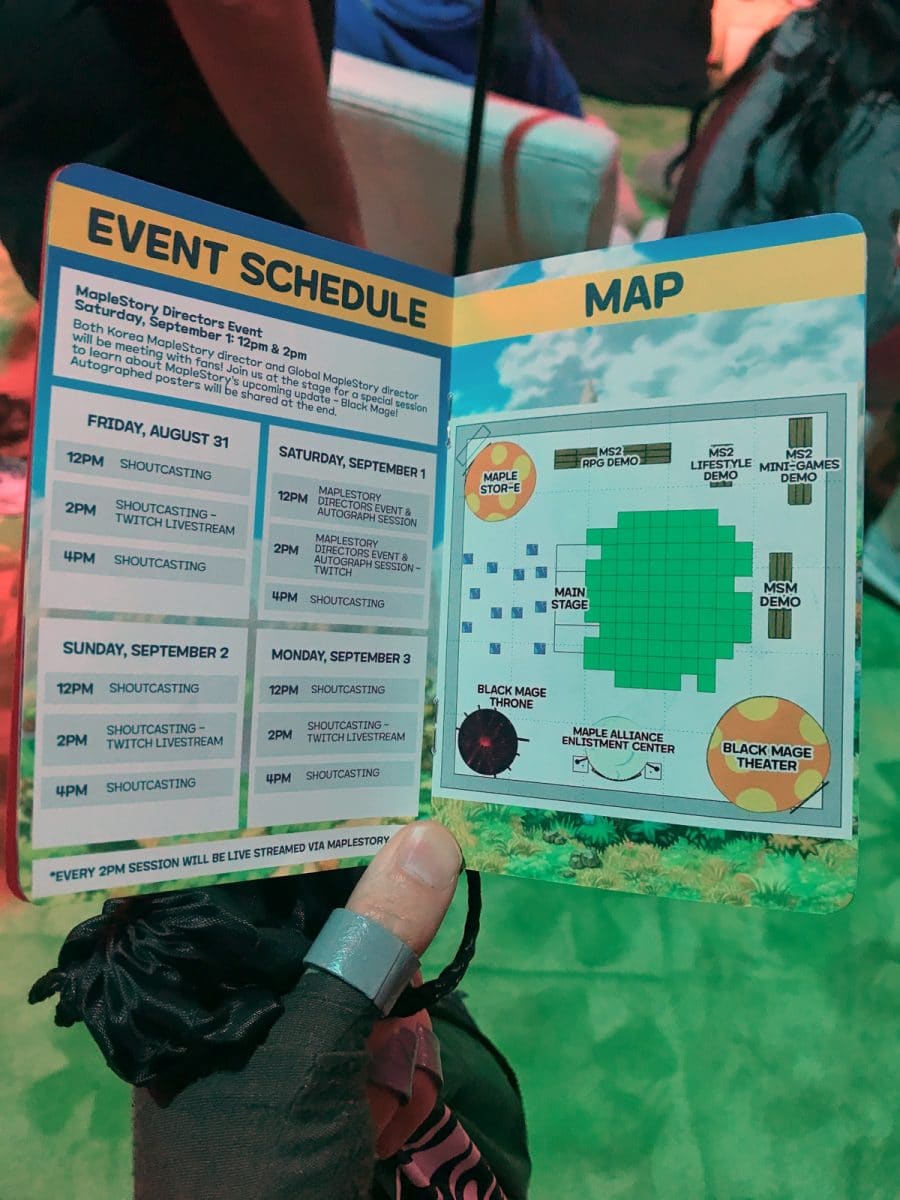 For even an interested Maple Story fan, this spread would allow them to know all the different ways to interact with the property at PAX. 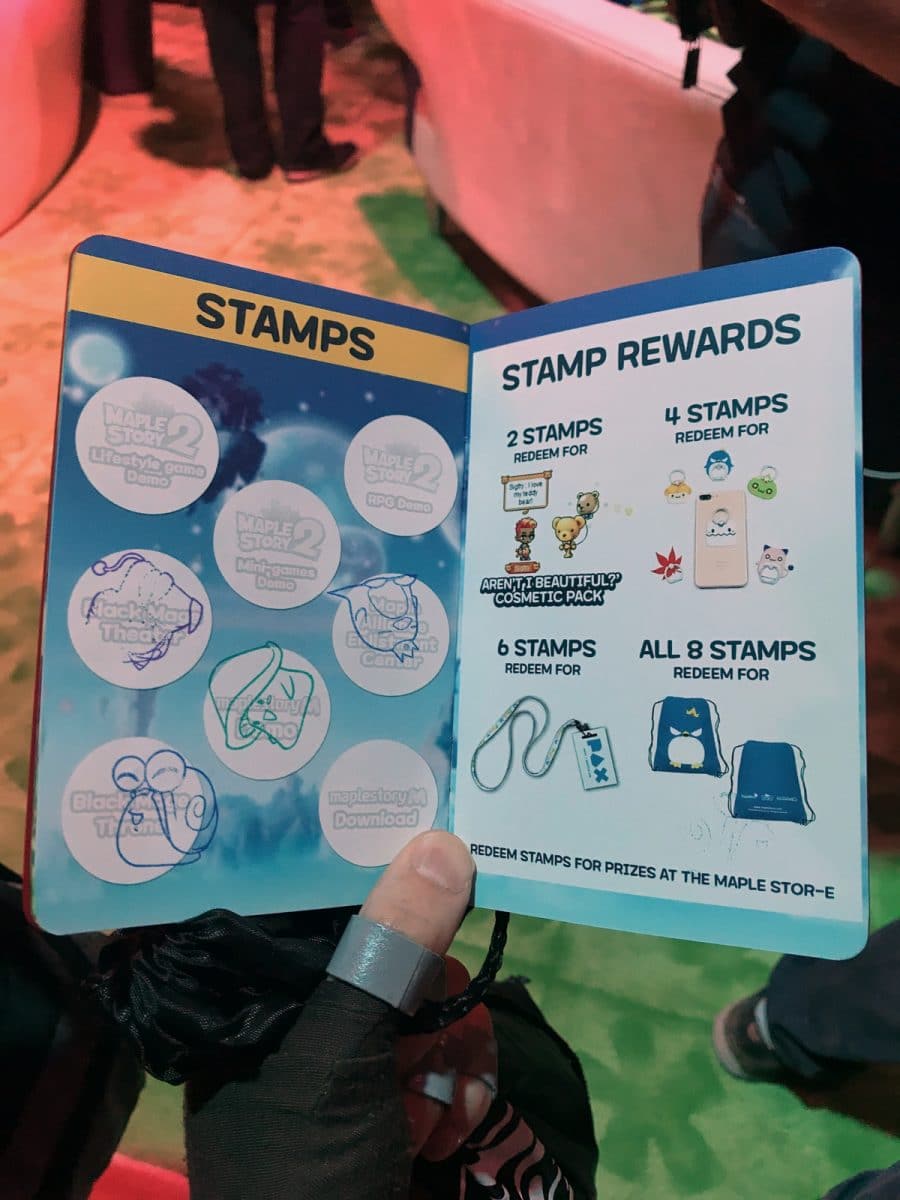 Here are some of the stamps along with the different tiers of rewards you could get for completing actions.

It’s amazing what people will do for free stuff even when they’re not really attached to the brand. The upside of this, is that now many companies—Maple Story included—have new potential gamers lined up that never knew about their properties.

This method often encapsulates a lot of other means discussed here, but at its core it involves fans going out of their way to find and complete specific actions. Sometimes scavenger elements centered around taking selfies with hidden objects around a booth, other times, fans were offered an opportunity to answer trivia questions at a hidden location around the Washington State Convention Center.

The most interesting scavenger hunt I saw came from Blizzard who was promoting their upcoming Diablo III release. 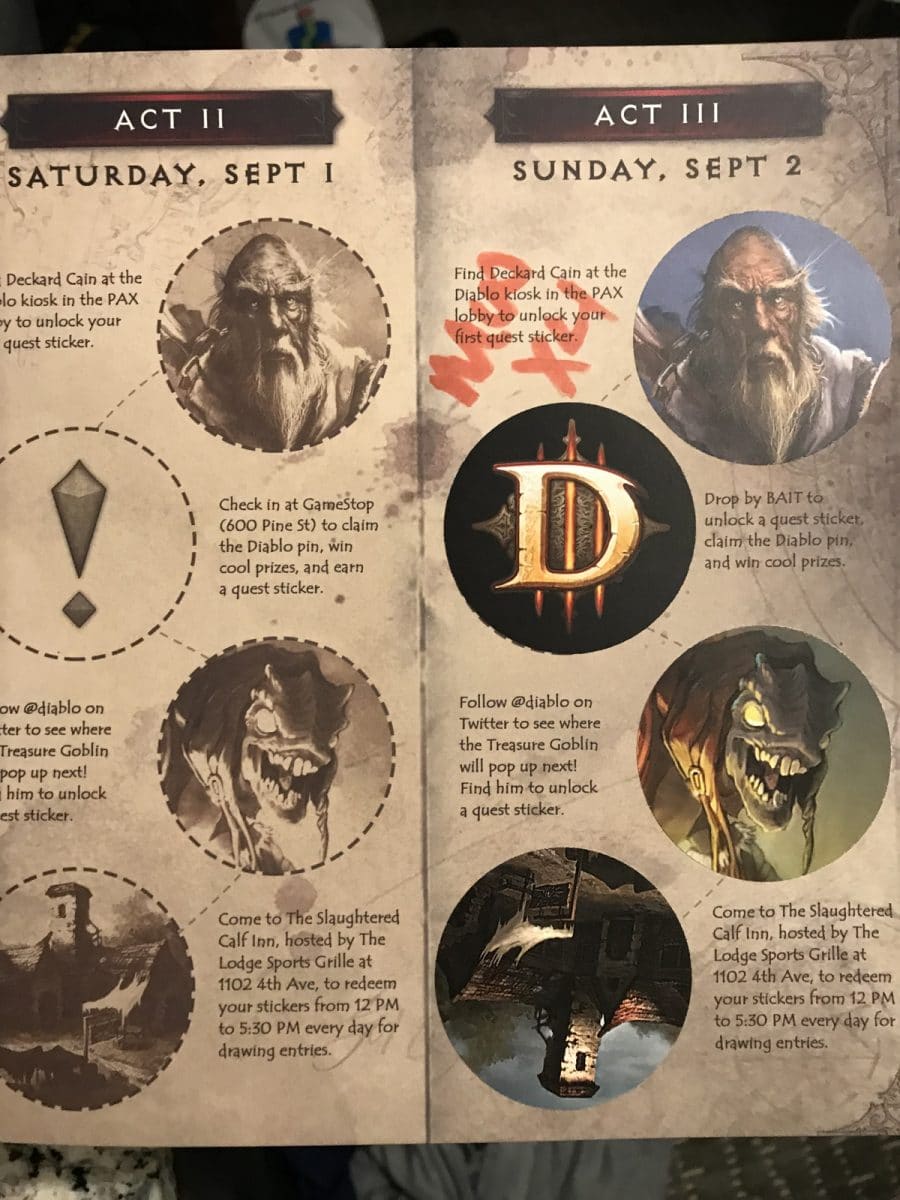 The basic setup was like Action Stamps—though people were collecting stickers. The similarities diverge quite a bit, beyond this though, as convention-goers needed to visit various locations around the city and convention center to collect these stickers.

Each player could also participate in these quests over multiple days (called Acts).

The first sticker was always given out at the same spot in the convention center, but the second and third were always a bit removed. One location was even a thirteen minute walk uphill from the Washington State Convention Center. For the Treasure Goblin sticker, in particular, interested convention-goers would need to stay glued to social media to figure out where the fiend was.

Only by finding the hidden location of the goblin would you be able to receive this particular sticker. The goblin was frequently on the move.

Stickers would be redeemed by the end of the day for raffle tickets which would give players a chance at prizes like figurines, Nintendo Switches, and 4K screens.

There’s a lot of complexity to this promotion here, which just goes to show what people will do in the name of brands that they like—and free swag.

All of these methods are good fun in their own ways, but the real value comes from understanding how the math behind all of this works. By figuring out, for instance, that a social media post is worth $3, you can go ahead and order that bag that costs $1.25 per unit.

There are many tools available online that can help in pricing out the value of followers and fan actions. At the end of the day though, these calculations will ultimately depend on what your numbers are. Figure out the numbers just right and you can get a lot of positive activity by giving away free stuff.

What other ways have you seen free swag used to get fans to interact more?

Sorry. No data so far.